Thai massage is a type of massage in Thailand and one of the most famous types of massage in the world. In Thailand, the common name for Thais to call this are Nuad Phaen Thai or Nuad Phaen Boran. The massage is not only an art form but also known to be a science of healing and therapeutic medicine Thailand. Thai massage is focused on the motion of rolling, pressing, bending, pullingTraditional Thai Massage and squeezing of almost all areas of the body. 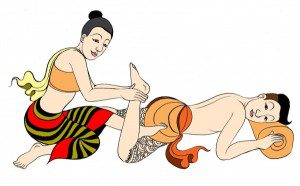 There is evidence that this form of massage was originated in India over 2,500 years ago and became popular in Thailand and around the world. Thai massage has also been developed and refined to suit the culture of Thailand which has now settled into the popular standard format used in Thailand today.

“The Courts Thai Massage Style” (Sai Ratchasamnuk) This massage style was targeted towards Royalty and the Upper Class who resided in the palace. Therefore, this massage was designed and adapted for the masseuse to use only their fingers and hands only. The movement used in this massage is very proper and modest. There are many rules for the masseuse to follow and obey. Learning this type of massage was restricted to the professional masseuses who specialized in this field, and who were mostly doctors in the Royal Palace – earning salaries and holding rank in the Royal Palace.

“The Commoners Thai Massage Style” (Sai Chaloeysak) is a massage style that was used with the commoners and the general public in Siam. It was a massage style that did not have a strictly fixed process that needed to be followed and is considered to be quite relaxed and informal. The masseuse may use other body parts in addition to their hands and fingers – such as the knee, elbow and feet to assist in the massage. This was quite different from the Courts Thai Massage Style (Sai Ratchasamnuk) which only allowed hands and fingers alone.

Later in the Ayutthaya Era, there was very clear evidence of the art of Thai Massage in the year 1455 sukothai masage(Buddhist calendar year 1998) in the reign of King Trailokkanat (Somdet PhraBarhom Trailokkanat). 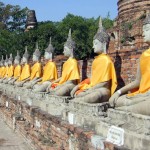 The decree divided the duties of medical specialization by separating them into different fields such as Pharmaceutical, Pediatrics, Optometry, as well as “Masseuse Doctors” field. All these doctors held high ranks and were granted pieces of land in return for their rank and their services to the royal family.

Later on, during the reign of The Great King Naresuan (Somdet Phra Naresuanmaharaj), Thai massage was at its peak and was extremely popular and vastly enjoyed throughout the Kingdom. More confirmation of these findings can be found in the archives of the French Ambassador, named Simon de La Loubère in the year 1687 (Buddhist calendar year 2230).

“When any person is sick at Siam he begins with causing his whole body to be moulded by one is skilful herein, who gets upon the body of the sick person and tramples him under his feet”